Essentialism is the idea that every entity has a set of recognisable attributes that are inherent to its identity and function. There are many different schools of thought that apply, debate and dispute this idea but for the purposes of this article, I’d like to consider the ‘essence’ or essential attributes of a nation. The United States. Its myths, legends and heroes often conform to an essentialist ‘essence’. American essentialism could be viewed through these national myths; the long and haunting conviction of white supremacy, the romantic hero and the ‘noble savage’ and the fight for democratic freedoms. These ideals have often clashed, leading to a patchwork and fragile national identity that historically centered around the WASP – a White, Anglo-Saxon Protestant – at the exclusion of others.

America’s finest moments, the days in history that they themselves celebrate – Independence Day, Columbus Day, Memorial Day, Thanksgiving, Martin Luther King Jr Day – are all moments in the national story that emphasise these inner conflicts. Moments where America had to challenge itself to be more than it was in some way. The identity of an ‘American’ is a project. It’s not a stable, predetermined list of attributes that relate to America’s history, culture and social norms but an ongoing negotiation with what the self was and what it could be.

This negotiation is a hallmark of American cinema. Revered actors like Jack Nicholson, Marlon Brando, Dustin Hoffman and Robert De Niro, all made history in films that challenged American masculinity and faux equality in the United States. A part of the counterculture of the 1950s, 1960s and 1970s, this generation of actors participated in redefining what it meant to be an American man. It’s no surprise that when a twenty-year old Ethan Hawke saw Taxi Driver and Raging Bull in a double bill in New York City, he recalled:

“walking down the street afterward so depressed, because I realised everything I wanted to do with my life had already been done”. – Ethan Hawke in Vanity Fair 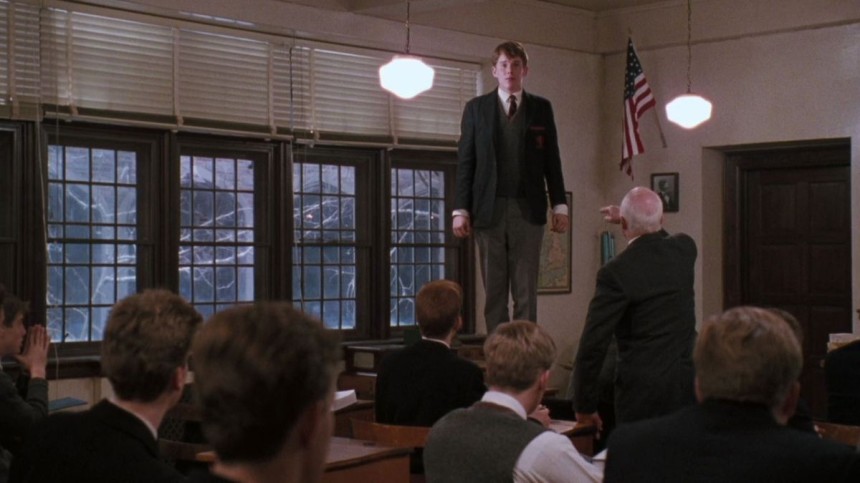 Ethan Hawke’s career feels as American as those who paved the way for him. Born in 1970 in Austin, Texas, Hawke was raised by his mother after his parents divorced in 1974. Relocating to New York City and then New Jersey, Ethan’s acting career began in school productions of American musicals and plays such as Meet Me in St. Louis and You Can’t Take It with You. The fact that Hawke’s career began in the U.S. education system with amateur reproductions of American classics feels poetic, considering Hawke’s breakout role was Dead Poets Society (1989). It’s as if Hawke was destined to stand on a desk and recite “O Captain! My Captain!”, a poem that mourns the death of one of the most iconic Americans, Abraham Lincoln. With Dead Poets Society being released in 1989 but set in 1959, there’s an awareness that American poetry in the 1950s was shocked and yet enthralled with Robert Lowell’s brand of confessionalism; the dirty, depressed soul of suburban WASPs laid bare as a rejection of the romantic hero and American society. For Hawke’s character to recite one of the most recognisable, romantic and yet woeful poems of American literature as a tribute to Robin Williams’ character John Keating, feels like harnessing the downtrodden and yet indefatigable heartbeat of American history in a rallying, naïve call for renewed optimism and love. Throughout his career, Ethan Hawke has soared in career-defining performances that successfully tap into what it meant to be an American, and what it could mean. 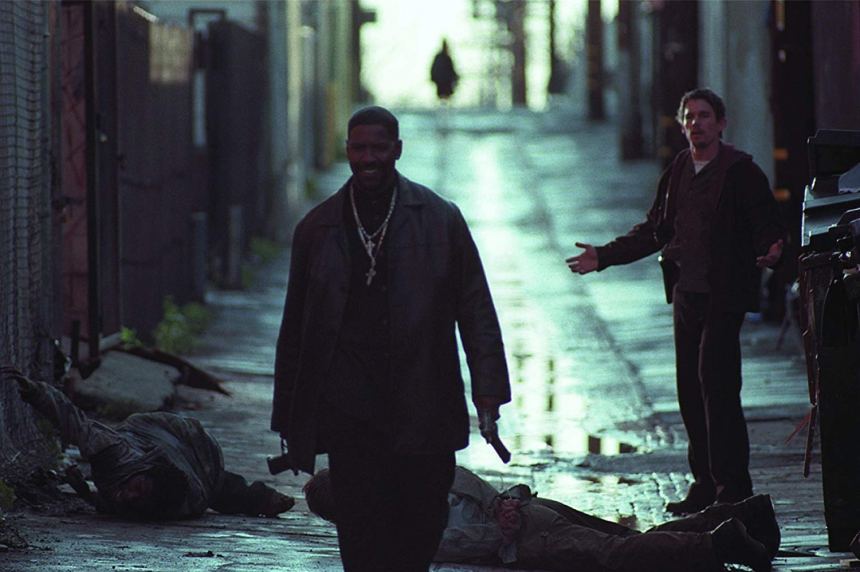 Twelve years later, Hawke would deploy his trademark boyish optimism against acting titan Denzel Washington, in Training Day (2001). The film sought to expose corruption in one of Los Angeles’ special operations units, the Community Resources Against Street Hoodlums or C.R.A.S.H. unit. It does so with two stellar performances that juxtapose different ideas of justice and honour. Hawke’s Officer Jake Hoyt plays like a model law enforcer, young and energetic but bound by a code of ethics that he is reluctant to bend or break. Denzel Washington’s Detective Alonzo Harris is street smart and always borderline criminal, constantly pushing Hoyt’s buttons and challenging his ideas of morality. Their showdown in the third act is thus a battle between Hoyt’s youthful, righteous naivety and Harris’ grizzly, nihilistic entrepreneurism. While Hoyt wins their duel, there is a rhetorical ‘at what cost’ that rings through its resolution. Harris feels like a product of socioeconomic experiences that Hoyt has barely any awareness of. Harris was not inherently good but kept order in his territory through violent and manipulative means. One factor in the ways in which Hoyt and Harris dispatch justice is race, and the socioeconomic conditions caused by systemic racism and neoliberal politics. Where Harris learned to protect himself by any means necessary in neighbourhoods neglected by white lawmakers and police, Hoyt was raised and trained in an environment that protected him from harm or racialised scrutiny. The reality of racial inequality and discrimination in the United States underpins the conflict between Hoyt and Harris.

“I had a love-hate relationship with police officers as a kid. Whether it be colour or just feeling powerless. That’s why Training Day was so appealing to me, because I had known some black officers who were worse, because they were part of the neighbourhood, so they would manipulate that situation” – Director Antoine Fuqua, 2014.

In this way, Hawke centred himself in a contemporary debate around criminal justice and the policing of black bodies as opposed to white ones. Again, Hawke’s character presents the optimistic, moral alternative to a bleaker American reality. His character is challenged to realise his privileges and to take steps to remedy the conditions that others are subjected to. Harris’ methods are not surprising or unique to those aware of the American history of isolating and subjugating black neighbourhoods through policing.

“America is a place of the western: big skies, the American Dream. You can get it – you just have to search yourself and do these things. But then it turns out not to be true for certain people. Because the idea of America that is always placed on us is not true. Not really” – Antoine Fuqua, 2014 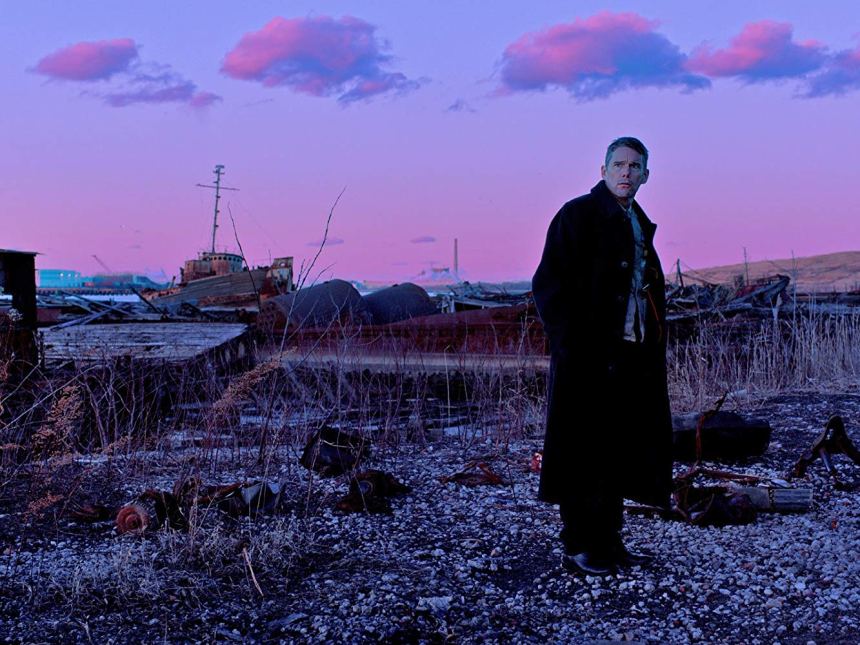 Hawke gives his most layered account of an American experience in First Reformed (2017). His character, Reverend Ernst Toller seems bound by traumatic histories of past, present and future. Leading the First Reformed Church in Snowbridge, New York – which had once been a stop on the Underground Railroad – Toller mainly guides tourists interested in that part of America’s history. Haunted by the death of his son Joseph, who Toller had encouraged to enlist in the Iraq War, the reverend struggles to renew and deepen his faith against the decline of his church, his struggle with alcoholism and the quiet rumbling of a terminal illness that has begun to seize hold of him. Hawke is cast perfectly. Renown for his soft-spoken, optimistic and loving energy, Hawke is magnificent in a role that seems hell-bent on breaking the spirit of the character. These individual battles with traumas of the past, with histories of darkness and violence, are matched only by the contemporary debate around climate change. As Toller battles with the potential man-made destruction of the earth alongside his own physical and mental deterioration, the reverend is left wondering whether there is any salvation for mankind.

“We’re not sure whether it’s [because of] our own shortcomings or society’s shortcomings that we can’t be the person we want to be. All that is Reverend Toller’s experience” – Ethan Hawke, 2018

Almost timeless narratives of salvation and damnation are paired with key moments in America’s history: the slave trade, the Iraq War and the country’s role in polluting the earth. Unlike Dead Poets Society and Training Day, there’s no opportunity for individual victories or redeeming action in First Reformed. The audience can only watch as Toller scrambles to understand and control the world around him.

“Life hurts for a lot of people in this world, and the movie in a lot of ways is a cry. Or a scream. It’s the scream of a very, very refined and fully mature artist saying, “Is there anybody out there?”” – Ethan Hawke on First Reformed, 2019

Having seemingly worked with more masters of American cinema than many other living actors, Ethan Hawke has repeatedly chosen acting roles that channel fragments of American identity in order to make powerful statements about the present. Like the generation of all-American actors that came before him, Hawke always seems perfectly in tune with the layers of a character’s personality and the ways in which their identities reflect upon or deal with larger social issues. If First Reformed or Hawke’s directorial effort Blaze (2018) are any indication, the artist seems headed into a phase of his career that focuses even more on the nebulous array of narratives that make up the American story. In 2020, Hawke will star in Showtime’s The Good Lord Bird as John Brown, the American abolitionist who tried to lead a revolution that would end slavery. Donning a long grey beard and period clothing, Hawke described the project as a story that’s “at the heart of America’s pain”.[5] Quelle Surprise.