For over a decade, the superhero blockbuster has been dominating the film landscape in full force. From Sam Raimi’s iconic Spider-Man trilogy, to Christopher Nolan’s technically great Batman trilogy, all the way to Disney’s wealthy success in the Marvel Cinematic Universe – superhero movies have been a commercial goldmine. Superhero films are so universally admired because not only do they provide escapism, they also play with many genres, thanks in large part to the diversity of comic book characters, which these movies are almost always based on. These movies can switch between comedy, drama, action or romance, and still stick to their core while doing so. Quite literally, there is a comic book movie out there for everyone, regardless of what they’re into.

However, despite the distinctive nature of these comic book films, there was always one thing missing until very recently – women. The actual presence of women wasn’t non existent, but any form of accurate representation or depth definitely was. Women in these films had a role to play – it wasn’t to be as badass or important as their male counterpart, but to exist merely as an object of lust. Comic book films are one of the most indisputable pieces of evidence for Laura Mulvey’s feminist theory of the Male Gaze, in which she brings forward the idea that women within the media often exist for the pleasure of the heterosexual male, and are there purely to be desired. The portrayal of Black Widow (Scarlett Johansson) throughout the Marvel Cinematic Universe (MCU) is a prominent example of this. This is a highly complex character with a back story that runs deep, and yet her on screen presence was reduced to nothing more than a sexy femme fatale who exists and perishes purely because of her relationships with male characters within the franchise. Despite being a key character in some of the most commercially successful MCU movies and being a certified fan favourite while doing so, Johansson wasn’t granted her own solo film until later this year. The production of her film is definitely progress, but it could be argued that this film was only greenlit because of the global success of Captain Marvel. In comparison to how quick her male counterparts got solo films, it’s pretty disheartening to know that it took as long as it did.

Similarly to Black Widow, Harley Quinn (Margot Robbie) was also a product of the male gaze within Sucide Squad (2016). David Ayer’s vision of this character was undeniably loved within pop culture, but it is very hard to dispute that she is extremely hypersexualised, and it isn’t just by chance. The marketing for Suicide Squad uses Margot Robbie as bait, and while the skills and traits of the film’s male characters are outlined, all that is outlined about Harley is how hot she is. While the film does attempt to go deeper, it is still clear through the sensual dialogue and camera work that Harley’s role in Suicide Squad was to satisfy it’s male viewers.

As someone who always loved Harley Quinn, this made me incredibly sad. I thought that cinematically the character was a lost cause, would go down the same route as Black Widow, and maybe appear as a side character in a Joker movie somewhere down the line. To my surprise, we were lucky enough to receive a movie with Harley as the lead character, and this time one thing was different – the director is a woman. I believe the perspective of female directors within this genre is needed more than ever and that’s made clear after Cathy Yang and her predominantly female crew were able to revamp Harley Quinn in Birds Of Prey (and the Fantabulous Emancipation of One Harley Quinn) through their empowering and uncensored ideas.

One of the most obvious changes for Harley between Suicide Squad and Birds of Prey is the outfits that she wears. Harley’s outfit in Suicide Squad quite clearly serves the purpose of making her look attractive, which highlights exactly what the filmmakers wanted from her character. The skimpy shorts allow for not-so-subtle camera shots that play a massive role in the objectification of her character and, as mentioned earlier, allow for marketing that caters to the male demographic on a silver platter. The outfit doesn’t look comfortable, and isn’t even realistic to the context of the plot, but it’s what men wanted to see, and so it’s the version of Harley that we got. The outfits that a character wears plays a much bigger role in the greater narrative of films than one would originally think – they reveal character traits, convey mood and psychologically advert the viewer in a certain direction. In Harley’s case, her outfit in Suicide Squad leads her directly into being a product of male desire. Its revealing nature sets the tone for her entire character – indicating that she is there purely for the satisfaction of male viewers, and nothing more beyond that. 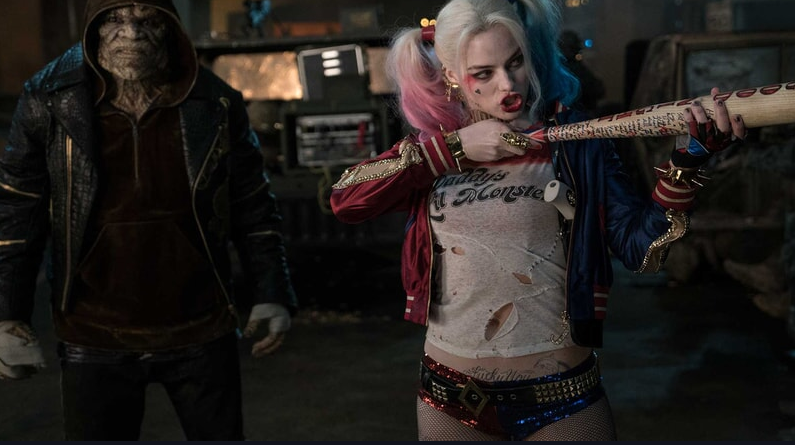 On the contrary, Birds of Prey provides multiple outfits for Harley that are the complete opposite of anything that we saw in Suicide Squad. The costume designer, Erin Benach, stated that while making the outfits for this movie she was focusing on what women would want to wear, rather than what men would like to see them in. This really translates into the costumes that she made, as they are a lot more practical and realistic to the everyday obstacles of a female superhero. When it comes to a brawl in the back of a police station I’m sure Harley, or any woman in that matter, would choose to wear high rise denim shorts and a t-shirt over low cut pants and a crop top any day. The costumes still play a massive role in the characterisation of Harley, but this time they outline her as an effervescent, extemporaneous trouble maker. Harley’s jacket in Birds of Prey is eye-popping and flamboyant, with mini caution tape hanging down the sleeves, which perfectly embodies the key traits of her character. Benach’s costume design not only helped Yan present a more accurate version of Harley on screen, but helped liberate her and divert away from the male gaze that has haunted her since her first on screen appearance.

Something else that can be picked up on while watching Birds of Prey is how unique Cathy Yan makes the fight scenes, and how – similarly to the costume design – they are a direct reflection of Harley’s character and everything that makes her special. We are at a point where there are dozens of comic book movies being produced, each with their own bundle of fight scenes to come with them. This makes it incredibly difficult for directors to produce fight scenes that are not only going to entertain us, but remain in our memory for some time after we watch the film. Yang successfully does this as each fight scene in Birds of Prey is a vivacious kick ass session exploding with colour. Yang takes the repetitive comic book movie formula and makes it completely unique to the character she is showcasing – while other films of it’s kind presents nothing but punches and kicks, Birds of Prey presents an exuberant carnival ride bursting with confetti. All of this not only helps make the fight scenes stand out, but also helps remind us  of why we are routing for Harley – because of how energetic, erratic and bizarre she is, and not because of how hot she is.

Looking from the perspective of Laura Mulvey’s theory, Birds of Prey having a female director played a major role in why this presentation of Harley didn’t end up as hypersexualised as her last, and why her personality was so highly capitalised on, which I believe is what makes the film great. The theory of the male gaze doesn’t only look at how men view women, but also at how women view themselves, and having a blockbuster as lucrative as Birds of Prey be shaped through the eyes of a woman makes this film a positive influence on how women look at themselves.